Church blows its own trumpet 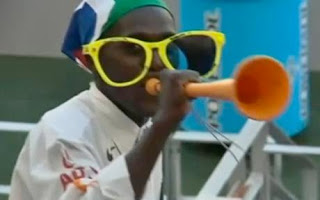 Fantastic write-up in today's Church Times about the vuvuzela, the trumpet that everyone blows at the world cup matches. It looks like an elongated kazoo, and sounds like nothing on earth.
Vuvuzela noise has generated a lot of complaints and the media have been trying to big this up into a racial row between Europe (stiff westerners complain - noise at football matches, tut!) and Africa (we blow things 'cos its cultural!). Apparently Sepp Blatter was asked to adjudicate on whether vuvuzelas would be allowed at the world cup, and solemnly decided that they would, because he wanted the matches to have local flavour.
Now Dr Tinyiko Malukele, of the World Council of Churches, has gone one further and declared that the horn (succinctly described by the CT as a "one-note instrument") is a symbol of Africa's striking back at the west for the years of missionary imperialism; a "cry for acknowledgment", no less. Meanwhile, a Bostwana churchgoer declares it to be "a biblical instrument", and a small sect in KwaZulu-Natal is attempting to claim patent on the horn and sue everybody who sells one. Church Times readers should also check out Dave Walker's cartoon for a sneaky vuvuzela reference.
I'm not sure what to make of all that, but what is clear is that there's no stopping this now. Once the church gets hold of a cultural touchstone like this, we know what happens next. Expect the Church of England to publish a liturgy for use with vuvuzelas before the final, and before too long John Sentamu will be blowing one in York Minster (while Rowan pontificates on their socio-cultural impact) and there'll be books called towards a theology of vuvuzelas and blowing in mission.
Now, where can I get hold of a few for the next all-age service?
Church Times Theology