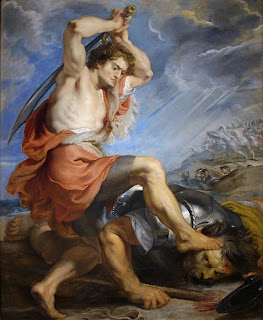 I've been reading the account of David and Goliath for this Sunday, and musing on how we deal with violence in the Bible. This story is the classic example, a favourite of Sunday Schools for generations, cheerfully passed down by good Christian people who, under other circumstances, would not be telling stories of brutal killing to small children.

Is this a problem? Should we go with it, in the interests of biblical literacy, and understand that most kids love hearing this stuff anyway? Or should we share the worries of those who say that we need to challenge the biblical texts' use of violence?

A common evangelical response is to dismiss such worries as so much liberal hand-wringing, as if to say "well, the sort of people who don't believe the Bible are bound to be a bit weak in the stomach, after all". But we need to be careful about that. After all, if we do take the Bible seriously, then we're talking about real violence here. Real violence - I think the picture makes the point.

It's true that most of us, when we are reading, can deal with violent scenes in quite a sophisticated way, and this doesn't make us heartless maniacs (not necessarily). Novels, cartoons, and especially movies have made it essential for us to have a violence filter of some kind in our imagination. But when we operate the filter, we're recognising fictional violence for what it is, in one of a number of forms:
1. "funny" violence. Exactly what you think is funny depends on your idea of good taste, but it's the cartoon effect that's at work here.
2. violence as adversity that needs to be overcome on the way to the happy ending,
3. violence which repels but in some way adds to our understanding of the story.
None of these, though, will really do for the Bible, unless of course you are happy to say that it operates as a work of fiction (not the line I'll be taking on Sunday).

I think what I'm saying is that any thoughtful person ought to be a bit disturbed by the violence we see in stories like these. Not excessively, considering the time gap of millenia, and the fact we've all read it so many times before, but it ought to at least make us think. At the very least, we need a good answer to anyone who asks us why we gathered to worship the God of love and spent half the time listening to a story of a beheading.

Rather than just pretending it doesn't matter, probably the way to make sense of all this is to read David in the context of the whole Bible, so:
- Goliath asked for it. Well, he did. Literally. This is actually one of the less difficult stories, in that the victim is hardly an innocent bystander.
- the violence of stories like this is directed against God's enemies. The Bible wants us to see that God will win his battles. This doesn't mean that violence is God's favoured means, more that those who live by the sword die by it.
- Christians always read the Old testament through the lens of the New. This doesn't mean we ignore it, we just interpret it. The God who called David is also the one who became flesh and said "love your enemy". (Matthew 5). This is really important because Jesus literally re-interprets the Law. And why not? He has owner's rights. I think that the human behaviour we see in the Old Testament reflects an incomplete understanding of God, even on the part of people like David who are acting faithfully. So the sort of obedience that was acceptable to him then (beheading your enemies, slaughtering those who oppose you, that sort of thing) is no longer acceptable now he has revealed his Son.
The OT is fairly gory in places. Pretending it isn't gets us nowhere. But neither does getting stuck on it. Jesus sets us free to learn from the Bible without thinking that it condones human violence.
Bible evangelical moments violence