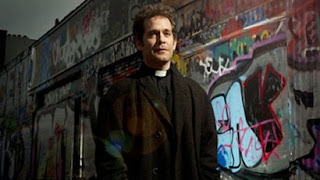 I thought it was OK.

Having read at least six reviews already on vicar's blogs, of which this one, by David Keen, was right on the money, I can't really think of anything else to say. It was OK, not that special. Can't imagine anyone without the particular interest of being a Rev themselves being gripped by it.

Apparently some clergy observers have commented that, although most of the scenarios are realistic, they thought the Archdeacon was a bit unbelievable. I don't know, though. Just because Archdeacons don't wear shiny gloves and wizz round in taxis giving orders to hapless clerics, doesn't mean they wouldn't, if they could. Their temptations are different to those that we, lesser clergy, are subject to.
Church of England TV

David Keen said…
thanks for the link Charlie. I think that line 'doesn't mean they wouldn't, if they could' is spot on - one or two other scenes in the programme brought that to mind (swigging beer in the churchyard, swearing at builders). There's one or two things we don't do because we know people are looking. In fact, the fact that people are looking is quite a helpful discipline sometimes....
July 1, 2010 at 7:16 PM

Anonymous said…
does your boss read this?