August 28, 2010
Another story that caught my eye in the eChurch Christian Blog was that of the Irish Gypsies arriving en masse in Birmingham, in the hope of catching a glimpse of the Pope (Birmingham Post). But I don't have any comment to add on the incident itself (other than to notice the authorities being totally flummoxed by the fact that people are flocking to see the Pope in huge numbers - this must be one of the few countries where this would cause surprise to the police). What was interesting, to me and probably to a small number of others, was the obscure pleasure of seeing Sarehole Mill get a mention in the press. 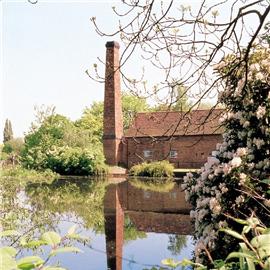 Sarehole is a restored water mill in Birmingham, a monument to the City's industrial heritage. It bears the name of a long-vanished village now swallowed by the urban giant. But it occupies another niche in history as the childhood home of JRR Tolkien.
Tolkien lived in Sarehole at a formative time of life, and remembered it with enormous affection. The Mill in particular occupied an extraordinary place in his memory - the pool where he used to play with his brother and annoy the miller on a regular basis came to represent for him, much of what he valued of "old England". This feeling was intensified and validated, in his own mind at least, by the effective destruction of the village of Sarehole as the City expanded. This caused him intense grief, but he was to live long enough to see the beginning of the restoration process. Were he to see it today, he would probably find much to disapprove of (as he disapproved of most things modern) but it would be nice to think he would at least take pleasure in the preservation of the mill and its surrounding ponds and field.
Tolkien's work has always divided opinion, and even the most ardent fan ought to admit that some criticisms are very easy to make of him. But if the critics were to read him in the same spirit of honesty, they ought to see that there is an elegaic quality to his writing that few authors have matched. The sense of mourning, of goodness dying away, that suffuses the Lord of the Rings is both moving and deeply realistic. I don't mind admitting that it's always struck a chord with me, as it has with all those readers who identify with the grief of a tree felled before its time, or an old lane dug up and lost forever. But such griefs are an inevitable part of life, to be borne along with all the other sorrows of the journey. And yet at the same time there is a joy in what remains, however small or fleeting it might be. Sarehole Mill stood for all that to Tolkien, so much so that it was reincarnated in the Lord of the Rings as Bywater Mill, which is desecrated but then restored, for a while at least. Long may it stand.
News Tolkien