This Thing of Darkness - Darwin and God revisited 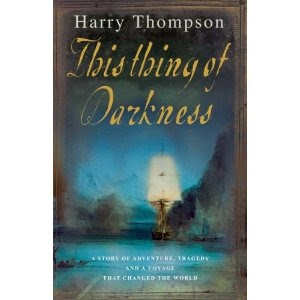 I've just a finished a great book - This Thing of Darkness by Harry Thompson, his first and only novel, as he sadly died shortly after writing it. It's a fictional reconstruction of the famous voyage of the Beagle, and the relationship between Charles Darwin and the brilliant but flawed Captain of the Beagle, Robert FitzRoy. While Darwin has become a landmark in modern history, FitzRoy is hardly known, and is usually thought of as a footnote to Darwin.

"Fictional" is hardly the word, though, as Thompson, drawing on meticulous research, sticks mostly to the facts of the account, proving once again that real life is often more gripping than anything an author can make up. This Thing of Darkness was well received when it was published, although not everybody liked it. Setting aside literary snobbery, the most telling criticism is that Thompson was a little ponderous in the moral messages he puts across. This is completely fair, but there is at least something refreshingly honest about this - he even admits in a postscript that he based the warmongering words of General Rosas on the speeches of Tony Blair. Don't be put off, though: fans of thoughtful historical fiction, with a bit (but not too much) of action, will enjoy it.

The most intriguing aspect of the book is the difficult relationship between the two principals. Thompson's sympathies are firmly with FitzRoy, and Darwin is painted as an unattractive character. However both characters offer us enough to want to follow them through the full 730 pages. The only weakness, for me, was the way in which Thompson presents their dispute over the biblical flood. This was real enough, with FitzRoy defending the literal belief in the flood, while Darwin promoted the new geological theories which undermined this. But the arguments they employ in the book are the arguments of today, rather than the mid-19th century. Darwin, of course, knew that his work would conflict with the beliefs of most of his contemporaries (one of the reasons he delayed publication of On the Origin of Species for so long). He was also shaky, to say the least , in his own views about God. But he would not have thought in the "God vs. Science" terms that are so prevalent today. The Darwin of This Thing of Darkness owes too much to Richard Dawkins.

Ironically, Dawkins himself popped up yesterday to acknoweldge the debt he owes to Darwin. Capitalising on the excitement caused by the "Stephen Hawkins atheist shock" story, he said this: "Darwinism kicked God out of Biology, but Physics was never so sure. Now Hawking has applied the coup de grace".

Both Dawkins and This Thing of Darkness (despite the sympathetic treatment of FitzRoy) say that Darwin kicked God out of Biology. But, as with so much of Dawkins' rhetoric, this is more what he would like you to believe than what actually happened. What is true, and what he puts his finger on, is that ever since the publication of Darwin's theories, there has been an agressively anti-God streak amongst Biologists, of which Dawkins is just the latest and greatest example. Darwin himself was more what we would now call an agnostic than an atheist, and tended to avoid controversy if he possibly could. However his work was promoted by the pugnacious Thomas Huxley, who was determined to go into battle on Darwin's behalf.

But even Huxley was no Dawkins, attempting stamp out religion and the very thought of God. His battle was with the church of his day, in particular the way in which it dominated the Universities and the scientific profession. This religious establishment was determined to defend the literal reading of Genesis, but not just that. The reason Darwin's ideas were so shocking to many Victorian churchmen was that they threatened the moral order of society, an order in which the church was comfortably placed near the top. Darwin's contribution was to help win the control of Science from the church and place it in the hands of professional scientists.

Darwin didn't kick God out. He did open the door for atheists in Science, but there always remained plenty of scientists who are Christian believers. What he did do was bring down the structure of respectable mid-Victorian Christianity. But should we grieve over that? This was the religion of "the rich man in his castle, the poor man at his gate" (the verse in All Things Bright and Beautiful that we don't sing), when the poor had to tip their hat to the squire and the parson, when Bishops lived on enormous tithes and the church scolded the poor for their lack of religion. It was not English Christianity's most glorious chapter. Maybe, in the long run, he did us a favour (but don't tell Dawkins).
atheists books Darwin Science

Left-footer said…
Darwin was also (to use a hackneyed phrase) The grit it the oyster for Tennyson, Matthew Arnold, and other Victorian poets whose faith he shook.

One shipwreck, and how different the course of Western thought might have been.
September 4, 2010 at 5:50 PM