Love your neighbour as yourself 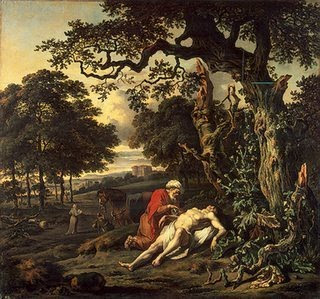 Today at Kea we're looking at Luke 10:25-37, that is, the Good Samaritan. This extraordinary story, one of the ones that would be lost to us if Luke had not recorded it, shows Jesus at his most radical. The man who asks Jesus "who is my neighbour?" is supposed to be an expert in the Torah, the law of God. But he needs a bit of help in understanding one of the two greatest commandments.

In reply, Jesus tells a story of a man lying in the gutter who is ignored by two men who should have known better. If the priest and Levite were serious about their religion, they would have obeyed God's law, and crossed the road. It is left to the Samaritan, the one who by rights should have nothing to do with the law of Israel's God, to do what the law requires and help his neighbour.
But who is the neighbour in the end? It's not a Jew who helps a Samaritan here, but the other way round. The Good Samaritan shows us that Jesus calls us to reach out way beyond our boundaries to the people we would rather not touch. But even more than that, he calls us to let them reach in and touch us.
Luke wants us to know that Jesus is the saviour of the world. Sometimes we Christians can act as though that salvation belongs to us, and we can dispense it to whoever we think deserves it most. But Jesus does not belong to us - he will call whoever he wants, and sometimes we may find that the "Samaritans" have a better grasp of the gospel than we do.
Gospel of Luke Neighbours

KeyReed said…
I'd always pictured this story as having takenb place on a dusty 'road, in the middle of a desert. This is the first art work I've seen of the parable. Thanks.
November 5, 2010 at 7:44 PM