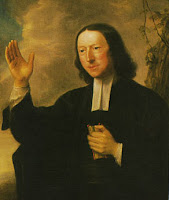 The Guardian (online) is running a series on preaching, trying to measure the health of the medium, and debating whether it has a future.
Simon Jenkins of the Ship of Fools comments on the lease of life that sermons have received from digital media, not least from YouTube. But what's also interesting is his passing comment that "preaching remains a significant event in churches", in other words, not just online but in the hard reality of church-bound worship. This rather belies the assertion in the opener from the Guardian, that "the one form of preaching that seems to have died in the West is the traditional delivery from a pulpit".
﻿﻿ I think this captures one of the strange things about modern church culture. There is a received wisdom that says that preaching is dead and belongs to the past, yet Sunday by Sunday thousands of sermons are preached without excessive objection from the listeners (we'll come back to that later). This is a good reminder to us that we shouldn't believe everything that people tell us. The church seems to have more than its share of people who don't allow the facts to stand in the way of a good opinion, and the "preaching is dead" brigade are a good example. It's possible to make a really forceful case for the death of the sermon, but sadly for those who make it, the one thing lacking is evidence.
So how can we explain the persistent survival of the sermon, despite the attempts of some to kill it off? A number of points suggest themselves.


Preaching works.  The question of why it works is something that has fascinated me for years, and which deserves whole books written about it.  But in a nutshell, it is because a sermon is not just a piece of oratory, or teaching, but a chance for us to encounter the Word of God. Many writers on preaching talk about the sermon as an "event", something which happens to those who listen (including the preacher).
Karl Barth said that in preaching, the preached word becomes the Word of God. In saying this, he wasn't downgrading the importance of Scripture, as some people said he was, but saying that preaching is something dynamic in which the Holy Spirit is acting on our hearts and minds, and through that we meet with Jesus.
﻿﻿﻿﻿Would it be too much to say that sometimes the event is more dynamic than others?  I don't think so. Also in the Guardian, Alan Wilson has a really good piece on preaching in context.  Sometimes the time and the place is right for a sermon to become an earth-shattering event of the Spirit. Alan suggests that the reason much of our preaching in this country is feeble is because the context is feeble. Like Jesus in his home town, perhaps? Maybe so, but God still seems to be able to work through preaching, even in Britain. And if we come to the sermon expecting to be changed, then the chances we are we will be.
﻿﻿
﻿﻿
﻿﻿ 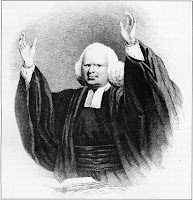 Arborfield said…
"Alan suggests that the reason much of our preaching in this country is feeble is because the context is feeble".

As always (almost) with the media I do not recognise what they are talking about at all. For 30+ years I have seen preaching (as the central act of worship) again and again being the main means of changing real people. It's inevitable (IMHO)... preaching to a verdict 'works'. In our current incarnation working with youth in the Exeter area we see hundreds touched and changed by the preaching of the gospel message.
December 11, 2010 at 7:03 AM

One of the issues I have with recorded sermons or published texts is that they miss that 'event' aspect of the sermon; the interaction between God, preacher, congregation and the context. Bishop Stephen's inaugural sermon as Bishop of Chelmsford a couple of weeks ago reads well, but it doesn't do justice to the event and impact on those of us there.

In training and assessing preachers, which is part of my job, I always find myself coming back to a basic question: What has God said to you through this sermon? And I am often surprised and challenged by the answer.

Suem said…
"Many writers on preaching talk about the sermon as an "event", something which happens to those who listen (including the preacher.)

I think that is very true, it is more than or different from a leson or lecture somehow - I can't quite say how, but it must be because of the spiritual, rather than purely intellectual, dimension.

I love to listen to sermons (generally!)It is an art form we should not lose, it gives me great pleasure to hear good preaching.
December 22, 2010 at 8:35 PM