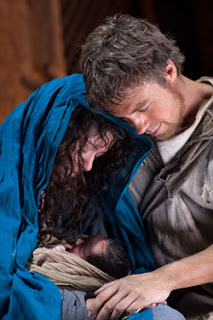 The BBC's Nativity has gone down a storm, with everyone from Christian twitterati to hard-bitten journalists queueing up to heap tributes on it. And why not? This blog joins the chorus, with a big thumbs up.

It would be tempting to say that the success lies in the power of the story, which would be true only up to a point. There is power there, but The Nativity allowed the story to speak, when it could very easily have strangled it at birth. In different hands this could have been a complete disaster. That it wasn't is due to some fairly basic values.

Firstly, the casting and direction. This was essentially a character-driven TV drama in four parts, and such programmes stand or fall on the quality of the acting, which in this case, was strong across the board, with very few weak links. Pride of place must go to Tatiana Maslany, who was flawless as Mary. She carried the whole thing from start to finish with a perfect combination of vulnerability and steel, a Mary far removed from maudlin plaster statues, but still credible as the woman chosen by God for her faith. Andrew Buchan was an excellent choice for Joseph, his restrained emotional range making him a perfect foil for Maslany, as Joseph struggled to come to terms with events. They were supported by a suitably heavyweight cast including Art Malik, shockingly underused as Herod's Prime Minister. The most honourable mention should go to Peter Capaldi as one of the Magi, whose skills were such that we were never tempted to think of him as the sweary Malcolm Tucker from The Thick Of It.

The second ingredient of success was the inspired choice of Tony Jordan as scriptwriter and executive producer. Jordan's soap and drama credentials gave us a script that had enough punch to lift the story out of predictable ruts, but kept a sure grip on the emotional levers that TV audiences appreciate. But Jordan as an individual was the perfect man for the job. In a series of fascinating interviews (such as this one) he has revealed himself as someone who both believes in Christ and also rejects institutionalised Christianity. So his Nativity lacks any of the sneering or mickey-taking that so often mars "religious" programming, but at the same time has no need to worry about whether it offends anybody. Sad to say, but if this had been placed in the hands of any "official" church or Christian group, it would have been stilted and pompous (witness the 2005 film of the Lion, the Witch and the Wardrobe as an example).

The storyline was well crafted, with dramatic tension being maintained by Joseph's refusal to accept Mary's story, and the danger to her from a society that would judge an adulteress harshly, perhaps even murderously (although in the end this was perhaps a bit over-cooked). The Magi and the Shepherds (represented by the impoverished Thomas) became useful subplots which fleshed out the context and gave the final scene more impact.

If the story works at a TV level, it would be quite easy to pick it apart at a biblical level, just as every year there is someone who cheerfully points out that there's no donkey in the Bible and it doesn't actually say how many Magi there were. No doubt a certain kind of biblical scholar will take great delight in telling us how inaccurate the historical details were. But as the same kind of scholar also believes that the Nativity stories are fiction, then it's difficult to see what their point is. To me, what we saw was faithful enough to the Gospels to give it credibility at that level. And if you still find it difficult to cope with seeing the Magi and the Shepherds in the room at the same time (a cheerful mishmash of Matthew and Luke), then just see it as an editorial way of making a theological point, something which the Gospel authors would surely approve of.

In fact, the series was stuffed with biblical theology from start to finish. Not just Matthew and Luke, but John as well. "Behold the Lamb of God!", "the Word made flesh!" quotes Melchior at the end. If anything, there was a bit too much of this, loading heavy meaning on to the Nativity in a way that the Bible doesn't, rather leaving us to wonder at the event and then work out the meaning as we go along. But I think the Magi as interpreters worked well overall, in particular a dialogue between Melchior and Balthasar on the road, in which they imagine God as a loving father who has raised his children and sent them on their way way, but now sees them endangering themselves. "The father would intervene" says Balthasar, in one of the best lines of the series.

For me, though, the real joy was in the small details. It was nice to see some of the Bible's classic lines rendered in the modern idiom of the script, such as; Elizabeth: "my baby gave such a kick when I heard your voice", or my personal favourite; Gabriel: "hello Mary". Little details carried a lot of weight. Joseph is older than Mary and has not married because he was waiting for the right person. The magi play a sneaky trick to avoid Herod's surveillance. And the only woman who would consent to act as a midwife for Mary looked suspiciously like the local courtesan, a nice foreshadowing of Jesus dining with the sinners and prostitutes. "He has come for such as you" says Gabriel to the shepherds.

What's not to like? Full marks, and thanks to the BBC for a great Christmas present.
Christmas TV