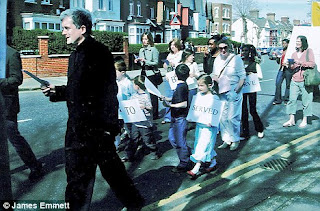 Please don't bother Always Hope this weekend with tales of Brent Council banning Easter, plausible though you may find it (guess which newspaper website has been trumpeting this one today?). It's true that it looks like a group of churches in Willesden won't be having their Easter march because they haven't complied with the council's health and safety protocols. But then, a headline in the Daily Mail saying "church fails to submit procession application in good time" wouldn't have quite the same impact, would it?

Father Hugh MacKenzie who, according to the Mail, is "defiant", is adamant that the procession cannot proceed on the pavement alone, although if the picture above is anything to go by, it's difficult to know why. It would certainly be preferable to the solution offered by Cranmer, who declares "it's the Queen's Highway", so "just go out and march". All well and good, but it should be noted that the churches aren't asking Brent for permission to walk down the road, but for the roads to be closed to motor traffic. "Just march" sounds like a recipe for a major RTA incident to Always Hope.

The most sane take is provided by this blog's publication of choice, the Church Times, who note, that far from the council banning something that has been taking place for years (as both Cranmer and the Mail assert), the churches are trying to revive the march "after several years without one". A very polite council "spokesperson" points out that the process of getting a traffic order takes at least five weeks, and if the churches would perhaps like to give them a bit more notice, they will be happy to get the march going next year.

So there you have it. Easter hasn't been banned, just deferred for another year.
Church Times Local authorities