Showing posts from July, 2010
Show all

July 15, 2010
Reading up on something yesterday, I came across this graphic , which might appear to be a diagrammatic representation of a bowl of spaghetti, but is in fact an explanation of how the various Presbyterian churches of the USA have come into being. Now, I'm not suggesting our way is superior to theirs - let's just say that all denominations have their strengths and weaknesses, something that is painfully obvious to any Anglican. But all that leaving, splitting, re-joining and re-splitting just looks really hard work. If the diagram is an accurate representation of the facts, some of these churches are forming a new denomination about every decade. It's not difficult to imagine the reasons driving this process. Doctrinal and ecclesiastical differences cause churches to part company, and once a precedent is set, then every subsequent dispute is more likely to have the same result. Occasionally two groups will find they have enough common ground to merge, but this is much
Post a Comment
Read more

No sympathy for Moat?

July 10, 2010
Apparently David Cameron has said that there should be no sympathy for Raoul Moat . His anger has been triggered by the way in which Moat has been idolised on facebook pages and roadside shrines, by people who seem him as a kind of hero. But I don't think Mr Cameron need worry too much about a minority expressing themselves in this way. Overall, public opinion is not sympathetic to criminals, particularly the likes of Moat. It will be difficult to find any news headlines bemoaning his death, even though he has evaded the justice of the courts. What he might consider, though, is the reaction of Moat's uncle . Understandably upset, he has said "what he has done is terrible, but he didn't deserve death". This also is unlikely to win many people over. Even those who tend to agree might want to add that he didn't deserve death, but neither did the man he killed, and the others he attempted to or intended to kill. But there is still some truth in what he sa
Post a Comment
Read more

July 09, 2010
The Church of England's General Synod meets this weekend in York. Stunningly, some people are listening to it live at this link: http://www.premier.org.uk/streaming/synod.asx This is very impressive from the national C of E, a body that not everybody would associate with good communication. They've realised there is a lot of interest in the debate over women bishops, and now we can listen as it happens. But if you're thinking of joining the audience, be warned. I've been told that no less than 14 hours of debate has been scheduled for that one item. It's live Jim, but not as we know it.
Post a Comment
Read more

How to get to the top in the church

July 06, 2010
I'm very happy to admit that any suggestions that Truro Cathedral might be crumbling a bit can now be laid to rest. Watching the local news last night, I was pleased to hear that restoration will soon be complete, and to see this wonderful clip of the Dean and his lieutenants doing their bit for the appeal profile, and ensuring the sanctity of their new weathervane. "Breathless but exilharated" would be one way of describing the demeanor of the Very Reverend Mr Dean at the top of his climb, while his colleague Peter Walker looks entirely unruffled. But was anybody else alarmed to see fully three-quarters of the Cathedral Chapter making the perilous ascent together? One freak gust or loose scaffolding clip could have spelled disaster, and plunged the Cathedral into liturgical anarchy. Don't the people there know there are protocols for these things? The Prime Minister and his Deputy don't travel in the same car. The various heirs to the throne fly in separate p
Post a Comment
Read more 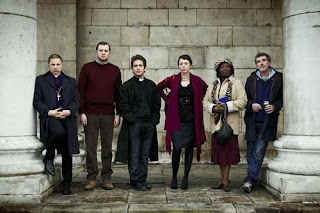 Episode 2 of Rev - my overall impression is about the same as last week . It's well-written and nicely observed; I just wish the pace was a little bit less tortoise-like, then it would stand a chance of being a real hit. For those who are wondering how realistic this all is, I can tell you - everything you see on this programme is true, but exaggerated for comic effect (well, nearly everything. One or two things aren't exaggerated). So Always Hope will refrain from whingeing about the crude stereotyping of evangelicals, on the basis that all's fair in love and war, and it was quite funny. My favourite is still the Archdeacon. I liked the bit where he said "must go - got tickets to Chelsea - Man U" and put twenty quid in the collection plate.
2 comments
Read more

Hope for which church?

July 05, 2010
Today I want to clarify something I wrote yesterday. I firmly believe that, with God, there is always a future for the church. But I didn't say anything about the Church of England. I don't think God holds a brief for any particular denomination more than another. The letter to the Ephesian church in Revelation has something to say here - a church that was once thriving can have the candle taken away. The Church of England, that curious 16th century innovation, has proved satisfyingly durable. It has survived purges, political interference, nominalism, vigorous nonconformity, the excesses of establishment and theological malaise. Throughout all this, its survival has been a remarkable testimony to God's ability to revive his church from the ashes. Yet this cannot be taken for granted in perpetuity. Over the last few years big cracks have opened in the edifice. This in itself is nothing new, but at the same time, the foundations have been eroding fast. If it's true tha
Post a Comment
Read more

Hope for the church

July 04, 2010
Today, as we celebrate the resurrection, a lot of people will have been slightly distracted by rumours of something which, if it is true, will cause a huge meltdown of already strained relationships within the church of England. It's at times like these that those of us who care about the church might be tempted to wonder why we bother. What possible future is there for the Christian presence in this country when this kind of thing is always coming back to haunt us? Yesterday I was at the ordination of Deacons in Truro Cathedral (which, I am happy to report, is safely shored up by scaffolding and showed no signs of falling down during the proceedings). The ordination service is always uplifting and moving, especially for the ordinands and their friends and families. But actually it's not about them. It's about the whole church, and the work of God. In particular the service celebrates the work of the Holy Spirit in calling people to serve Christ in his church. It r
Post a Comment
Read more

July 02, 2010
Today I came across this post on Cranmers Curate , a fascinating critique of the rhetoric of Mark Driscoll . Mr Driscoll has become something of a totemic figure, attracting loads of criticism from those who you would expect to dislike him, but increasingly popular within the world of reformed Christianity and, over here, conservative evangelicalism. This is the first critical opinion I have seen from within, as it were, and is all the more potent for that. I don't think I've seen enough of Driscoll to confirm Julian's view, but it rings true with what little I have seen, and more strongly for me, with my experience in evangelicalism generally. [Now please understand, reader, that when I write of evangelicals I do so from within. I was born and raised (in the spiritual sense) within that fold, and remain there to this day. I am not post-, or ex-, or any other sick note excusing me from doing evangelicalism any more. But that doesn't mean I can't have a gru
Post a Comment
Read more

Theological angle on trousers down incident

July 01, 2010
A swift update on the previous post, thanks to the brilliant Church Mouse Blog: It turns out that Mayor Colin Hall is a stooge in the campaign to ban council prayers and is one of only two mayors to so far condone this nasty and small-minded trend. Whilst I symapthise with Mouse's triumphalism, I feel it would be ungracious of me to withdraw my previously offered sympathy and advice. Always Hope wishes Mr Hall well in his search for better fitting trousers, and in this way hopes to heap burning coals upon his head (but not down his trousers). [Proverbs 25:21-22, Romans 12:20]
Post a Comment
Read more

July 01, 2010
Sad news from Leicester , where the Lord Mayor has been forced to apologise after dropping his trousers in front of a group of schoolchildren. When I saw the headline, I thought this was something sinister, but it turns out to be completely innocent (if we rule out the possibility of sabotage). As the good Alderman stood up, the trousers simply obeyed the law of gravity. The BBC has been briefed by the Mayor's "official spokesman" who, struggling for a convincing underlying explanation, can only come up with "he was not wearing a belt." What's really awful about this is the way the poor chap is obliged to apologise for "any offence caused", as though this was a practical joke gone wrong. As if any of the hundreds of children present were not entirely delighted by the sight of his humiliation. Free trouser suspension tip: Always Hope recommends the use of braces when wearing trousers that are only kept up by tummy pressure.
Post a Comment
Read more
More posts