Showing posts from May, 2011
Show all

No more post-rapture schadenfreude, thanks

May 21, 2011
Reading the innumerable posts and tweets about the non-rapture leaves me feeling despondent.  Maybe it's been a long day, but I feel sorry for anyone who really believed it was going to happen, I feel sad at the circus it has become, and very much regret playing my part in that, and I feel thoroughly dissatisfied with the ongoing failure of some Christians to understand some of the simplest principles of bible reading. The circus, I think, is regrettable. I can understand why some Christians wanted to join in the general fun and jollity, poking fun at this nonsense. I did too, but in the end there was just too much web-based Christian mickey-taking for anyone to enjoy. And those who were claiming some kind of noble motive for it need to pipe down.  It's like having an embarrassing little brother who you join in with bullying, because you think that will make it less embarrassing.  It doesn't. He's still your brother, and everyone knows it. If we really wanted to discr
2 comments
Read more 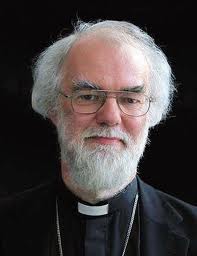 Today it is a pleasure to redress a certain imbalance that's become apparent on this site, and to celebrate and admire the gifts of the present Archbishop of Canterbury (although the temptation to dish out some advice will not be resisted). Rowan Williams' own website today published his recent address to the national Fresh Expressions conference in Oxford (you can watch it instead , if you prefer).  This is not going to be a detailed review of the talk, but it's well worth a read.  His characteristic "thinking aloud" style works well in this environment, and as usual, his content is deep and solid, without fluff or padding.  What superficially sounds like a quickly prepared address is full of biblical reflection, cultural references, and original thought. There's some great stuff there about the nature and process of evangelism, and about how the sacraments might fit in a "fresh expressions" church culture. The idea of "helping people to
1 comment
Read more

May 15, 2011
Here's today's sermon. The text is John 10:1-11. It's a reflection on the nature of Jesus as revealed in these words, and an attempt to pin down what Jesus might mean by "life in all its fullness".
Post a Comment
Read more

May 09, 2011
That's session 8, not post number eight. I've lost track of how many sessions I actually blogged on. A group of us at Kea have been working through the CPAS Growing Leaders course. What sets this course apart from other leadership material is the focus on the character and calling of leaders, rather than on the "how to" of leadership. On Wednesday we arrived at session 8, "embracing cost".  Focusing on Colossians 1, we thought about what it might mean to "rejoice in our sufferings". In context this means going into leadership with your eyes open, understanding what it will cost you, and embracing that as part of your vocation.  I think this is so appropriate, and reflects the shape of Christ's own life and ministry. But what really hit me was a small detail at the beginning.  As an exercise, we were asked to list the possible costs vs. benefits of Christian leadership - a good way of engaging with the topic.  And a great majority of our
1 comment
Read more

move along, nothing to see here.

May 07, 2011
In case you're following a link to piece saying that a well-known blogger has hung up his keyboard: it appears he has changed his mind.  As somebody once said, reports of his demise have been greatly exaggerated. I'm not falling for that one again.
2 comments
Read more

May 06, 2011
Good stuff from Bishop Alan Wilson , who has a comment piece in today's Church Times on social media and blogging.  There is a slightly comic feel to it as he gently introduces the CT's readers to the big new world -  "Twitter: a site for comments and links in a tiny format of 140 characters, called Tweets" - but he does it well, and still has room for some more insightful comments. In particular he is very strong on the challenge that online media present to the Church's way of doing things. How about this: New media are inherently anti-hierarchical - some bishops may not take kindly to a world where nobody cares who any of them are, in which they are only as good as their last job. It's quotes like that which make Alan one of my favourite bishops, even if he is rude about evangelicals sometimes.  Most of our episcopal leaders have not yet grasped that, increasingly, authority has to be earned rather than assumed. Alan has, and he doesn't mind poking a b
1 comment
Read more

What kind of ministers do we want?

May 04, 2011
I've been thinking about this post from Andy, On (not) being ordained . You need to read it, but in short, he describes his journey to the point firstly, of being called to ordination training as a pioneer minister, and now, of deciding not to proceed to ordination.  It's something of a cry of the heart, but also reflective and challenging. Andy reveals a certain degree of hurt without being at all bitter. He exposes some of the weaknesses of the modern Church of England, but is still able to affirm its strengths.  Two observations particularly struck me. The first was "old habits die hard - actually, many of those old habits don't need to die".  Although it's a truism, the reminder that "traditional church" is still where it's at for most churchgoers is a challenge to the way in which we present new ways of doing church.  The second is much sharper - "there is a degree of salesmanship in any church ministry".  I don't think Andy
6 comments
Read more

May 03, 2011
I know it's neither topical nor timely, but this is my Palm Sunday sermon. I decided to start uploading sermons to the blog with this one, but it's taken me a couple of weeks to grapple with the technology. Let's hope it works: (If you listen, could you let me know if there are any problems, thanks) For me this was an important sermon. I felt it was a moment to get closer to the heart of Christian discipleship, what it might cost us, and where it might lead us. It was at this time that I wrote this post on "of gods and men".
Post a Comment
Read more
More posts