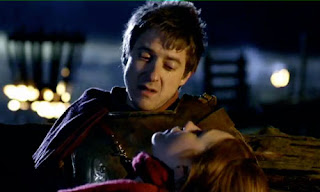 I know, how corny, a vicar using Doctor Who to make a spiritual point, but at least it isn't the football.
The fact is that the last episode, blockbusting season finale The Big Bang, interacted at several points (probably inadvertently, or at least, unwittingly) with the doctrine of the resurrection of the body. Which goes to show, that Stephen Fry may be right in calling it infantile, but that doesn't stop it from touching on the deepest mysteries of existence and eternity.
Humans have always dreamed, and dared to hope, that, contrary to the evidence, we might somehow find that there is life beyond death, existence after the apparent extinction of all that we are. The question is, how? The Doctor seems to have found a method which sounds suspiciously theological.
Early theologians debated how God could possibly re-assemble our physical bodies from their constituent parts. Even before science revealed that we share the atoms of our bodies with all those who have lived before us, this seemed unlikely. More recent Christian thought has preferred to talk about the "pattern" which is each individual being the template for resurrection; that is, the complex package of memory, thought, and personality that is me will be imprinted on to my new body, perhaps like a piece of software being transferred to a new computer.
This is pretty much the way it happens in Doctor Who. We've already seen that Amy could bring Rory back, even though it seemed that his entire existence had been wiped out. "Nothing is ever really forgotten" says the Doctor. Now the entire universe is being erased from time - no problem! The memory of time that emanates from the Pandorica can be used to "reboot the universe" - in other words, everybody's pattern will be re-created.
This piece of classic Who-science was perhaps inspired by the work of physicist Frank Tipler. Tipler thinks there will come a point at the end of the universe when all the lines of time will run together, and given the use of appropriate future technology, the memories of all those who have ever lived can be re-created and live forever in a kind of infinite virtual world. But scripwriter Stephen Moffatt has an imagination bigger than Tipler's. The Doctor re-creates the universe not virtually, but for real. Amy gets her mum and dad back, and Rory isn't plastic any more.
But the best bit was when Amy brought the Doctor back from the void. Although he no longer existed, such was the power of the memories that he had planted in her mind, she was able to re-create him on the spot when the right time came. The day of resurrection...
It was a brilliant story, and a genuine myth for our time. But there's one problem with it as theology, or science. Maybe we do, in a way, exist in the form of memory in each other's minds. It may even be that future technology could imprint the entire "pattern" of a person in a mind or a computer. The problem is, we don't have the power to re-create that person from the pattern. There are no Amys in real life.
But there is one who does have that power. In God's mind we are perfectly remembered, because he drew the pattern and he knows every single aspect of it, including all the corrections and patches it has picked up along the way. Memory really is a powerful thing, when it is God's memory, and we will be held safely there until the time comes. It doesn't even matter if the universe collapses, as it one day will, because he will remember that too, and re-create it, uploading the software to a new and better frame.
Eschatology Resurrection TV