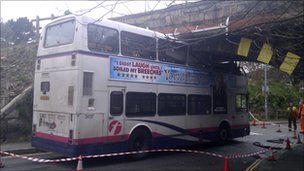 This photo from today's local news reminds me irresistibly of Thomas the Tank Engine. Or rather, of his associate Bulgy the Bus, an unsavoury character who suffered the same fate as the one in the picture. But to cover the news angle first: this incident took place in Falmouth on Friday. From the relative dimensions of the objects in the picture, we can infer that this is not the usual bus route into Falmouth. From the fact that, fortunately, there were no passengers on board, we can guess that perhaps the driver nipped into town for a bit of shopping and forgot that he wasn't driving his Ford Focus from home. I don't think this is an April Fool, although I drove under this bridge today (without harm, you will be pleased to hear) and it looks quite unscathed. But if it is a fool, it doesn't make any difference to what I'm about to say, and it isn't very funny anyway.

Returning to Bulgy, you may remember that this vulgar diesel-powered chap had the unfortunate habit of telling "whoppers", an anti-social practice that greatly upset the decent steam engines who had to endure his company. I quote from memory, but having been forced to read aloud the complete canon of Thomas the Tank Engine stories several times, when somebody in my family was about three or four, that memory is quite good. Fortunately Bulgy got his just deserts when he crashed into the aforementioned bridge, which apparently served him right, and then, bizarrely, spent the rest of his unending miserable existence being used as a hen house in the field near the bridge.

I never really liked Thomas very much. I think perhaps this is because of the contrast between the authorship of the "The Revd" W. Awdry, and the constant repetition of punishment, such as in the clunky analogy above. Not all the sanctions are as severe as Bulgy's, but punishment is never far away. Thomas gets nearly run off his wheels by Gordon for showing off, Gordon is forced to pull a goods train to take him down a peg or two, Henry is walled up in a tunnel for refusing to go out in the rain (although he is later released - a kind of purgatory?). The engines of the Island of Sodor live in a simple universe where moral failure (or being a bus) incurs immediate and appropriate justice.

The good Reverend seems to have had a highly developed sense of divine retribution, but was perhaps a little shaky on grace. Justice, of course, must be done in the world. Wrongdoers must account for the harm they have done to God and his creatures, and if human justice isn't up to the job, we need to know that God will judge justly. But since we all suffer from the same failings as Thomas and his mates, plus many other sins beyond the imagination and capability of a steam engine, we also hope that God will show mercy, even when we deserve justice. Thomas would have had a better time if the Revd "W" had paid more attention to 1 Corinthians chapter 13, or the Parable of the Prodigal Son, or even Psalm 103:


He does not treat us as our sins deserve
or repay us according to our iniquities.
For as high as the heavens are above the earth,
so great is his love for those that fear him;
as far as the east is from the west,
so far has he removed our transgressions from us.
As a father has compassion on his children,
so the Lord has compassion on those that fear him;
for he knows of what we are formed,
he remembers we are but dust.

The life of Jesus is the ultimate demonstration of this, and his death shows how it is possible. In the cross, our wrong moves are not punished, but forgiven. In return, he asks us to do the same: "do not judge, or you too will be judged". We are to practice forgiveness on each other, not dishing out retribution at every opportunity. Justice must be done, but mercy will prevail in the end.

Ray Barnes said…
Thanks for this one Charlie. It is good to see the psalm quoted in your post. Much more in line with the concept of a loving forgiving God than those quoted in many such cautionery tales as "Thomas". As you say, he appears to be a little short on mercy.
April 3, 2011 at 7:11 PM

Suem said…
That's weird, a bus crashed into a bridge in my town a week or two ago- tore the roof off, fortunately nobody was hurt. Can't say it made me think of Thos the Tank - but an interesting reflection here, thanks!
April 10, 2011 at 6:24 PM