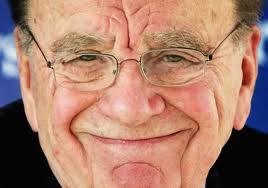 Yesterday I wondered aloud if anyone else was feeling bemused by the media frenzy over The News Of The World (of not-so-blessed memory) and its associated publications and personnel.  Apparently not.  The general consensus is that this is one of the most important events this year and deserves every micro-second of media coverage that is being devoted to it.

We are told that we live in a new media culture, where the news agenda is set, not by editors sitting in a darkened room somewhere, but by the people, the millions of bloggers and tweeters and whatever who get hold of a story and force the powers that be to take notice.  This is obviously true, and has in many ways increased the transparency and accountability of public life, in this country at least.  The downside of this, though, is that news media tends to be more knee-jerk reactionary than ever, less given to analysis, and dare I say it, more and more likely to initiate huge bandwagons that everybody else jumps on.  The blog- and twitter- based reaction to this story has been almost uniformly along the lines of "ha, ha, serves them right" and a headlong rush to encourage each other to blackball all the rest of Murdoch's publications.

But it seems to me that this is not at all a clear case of the bad guys getting what they deserve, and many things are not what they seem. The media, or at least the non-Murdoch media, are in a particularly murky place with respect to this.  Yesterday the BBC was running a live web-feed of the story, coverage of the sort normally restricted to national elections or major catastrophes.  It's always been too much to hope for a sense of proportion in news coverage, for if it was not, then every web page would have been taken up with the famine in East Africa, which threatens to make the one that reduced Bob Geldof to pure rage look like a tiny blip.  But if you wanted news action, why not live-feed the developing Euro crisis, or the birth of the new nation of South Sudan?

The blogger Cranmer, who as usual is gloriously off-message on this one, was quick to remind us yesterday that the BBC has a massive vested interest in the damaging of Murdoch, with his BSkyB takeover still in the balance.  He also wondered whether News International is being scapegoated, when its rival the Mail has been guilty of significantly more illegality, but for some reason, nobody seems to care about that. A scapegoat was ordained to carry the sins of the rest of the community out into the wilderness, a system which the British media seem keen to revive this week.  Incidentally, a minor item on the TV news last night concerned the ongoing controversy over corruption in the bidding process for the 2018 and 2022 world cups.  What wasn't mentioned was that this corruption was first exposed by The News Of The World.  In this matter, simplistic judgements simply aren't good enough.

And what of politicians?  Cameron has been caught red-faced. But we've all seen the pictures now of Blair giving Rebekah Brooks a big kiss when he bumped into her at NI headquarters.  Even Ed Milliband, who gave a good performance in the House of Commons yesterday, can take no pride from the fact that he was a minister under 2 PM's who courted the media, and that he has been wined and dined by the Murdochs too. Politicians here are just rushing to pelt the target with stones before anybody notices their own involvement in what has gone before.

And the tweeting and blogging gang don't come out of this too well either.  There's only so much righteous anger and schadenfreude that the internet can churn out before we all start to look a bit shabby. It's long been known that the Scapegoat is a model of the way that all human communities tend to behave.  We identify a target, turn our anger on it for its sinfulness, and destroy it, leaving the rest of us feeling a lot better about ourselves.  Jesus, who became the perfect scapegoat to save us from being the victims of sin, had something to say about this when he was offered a scapegoat in the form of a woman who was caught in the act of sinning.


At dawn he appeared again in the temple courts, where all the people gathered around him, and he sat down to teach them. The teachers of the law and the Pharisees brought in a woman caught in adultery. They made her stand before the group and said to Jesus, “Teacher, this woman was caught in the act of adultery. In the Law Moses commanded us to stone such women. Now what do you say?” They were using this question as a trap, in order to have a basis for accusing him.
But Jesus bent down and started to write on the ground with his finger. When they kept on questioning him, he straightened up and said to them, “Let any one of you who is without sin be the first to throw a stone at her.” Again he stooped down and wrote on the ground.
At this, those who heard began to go away one at a time, the older ones first, until only Jesus was left, with the woman still standing there. Jesus straightened up and asked her, “Woman, where are they? Has no one condemned you?”
“No one, sir,” she said.
“Then neither do I condemn you,” Jesus declared. “Go now and leave your life of sin.”


Me, I'm dropping my stone and slinking off home.  Anyone care to join me?

Simon said…
Well said. A thoughtful post that puts this whole News International situation into some kind of perspective.
July 12, 2011 at 9:30 PM

So was Our Lord.