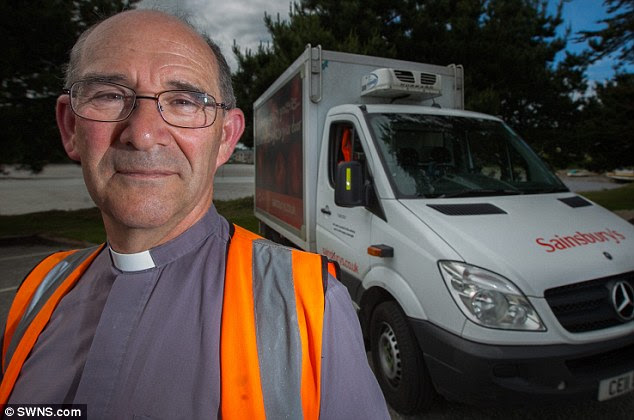 A vicar in Cornwall has taken up driving for Sainsbury's delivery service. [warning to readers of a delicate constitution: links to Daily Mail website]. Of course the idea of the worker priest, or minister in secular employment, is a well-established and noble one. We've long benefited from the ministry of priests who earn their living in other jobs, taking their vocation to work, and bringing back their multi-faceted experience to the Lord's Table. What sets the Revd Martyn Pinnock aside is that he offers a less theologically nuanced reason for his new job, ie. he needs the cash. In fact he is not officially a Minister in Secular Employment at all, because he is a stipendiary priest, paid by the church. Or, to be precise, half-stipendiary.

This isn't a criticism of my old diocese, Truro. Or at least, not a criticism of Truro in particular. But without a doubt, there will be people around in Mr Pinnock's parish and his diocese who will frown on this as an inappropriate and selfish move by a man who, in their eyes, ought to be devoting himself to the work of the church. Whereas the correct response should be simply to note that, as a staff worker effectively employed for 50% of full-time, what he does with the other half of his work hours is entirely his business.

And could we blame him? The Mail's given explanation for his employment move is that he was recently divorced and needed the money for legal fees. But probably a more direct explanation is that a half stipend is about £12,000 a year. As we noted already, he needed the cash. Given his circumstances, it's very unlikely that he took a half-stipendiary post by choice, but because there was no realistic chance of getting a full-time one.

And there's the thing which should give pause for thought for anyone interested in the future of ordained ministry. Over the years Dioceses have elevated to a virtue the pursuit of knocking money off the bill for clergy pay. The latest of a long list of cunning plans is the half-stipendiary appointment. Diocesan leaderships like it because it helps them eke out the meagre number of clergy posts they allow themselves, and because it is nice and cheap, especially if by some alchemy they can persuade the priest that being paid half a stipend means working two-thirds of the time. And in reality, many part-time paid priests put in the extra hours out of their own time, because that's the kind of people they are, and because congregations, who have often been used to having a full-timer, have not scaled down their expectations. So everybody's happy.

Except, as it turns out, the priest. It's quite easy for a hypothetical Archdeacon in a hypothetical diocese somewhere to convince himself that because he gets applicants for the half-time posts he creates, that there are lots of clergy who really want to work for half pay. This enables Archdeacons to sleep at night but isn't a rigorous analysis of the situation. Of course there are some ministers whose circumstances mean that a part-time appointment suits them better (assuming they are able to manage their boundaries strictly) but there are many others like Mr Pinnock, who would like a full-time post but can't get one.

This is serious because it begs the question of what we as a church want from our ministers. I imagine that most churches would like to think that their parish priest is wholeheartedly devoted to their work, energised by a call from Christ and a desire to serve. And clearly this is what any Bishop would hope for the clergy in their diocese too. On the other hand, if you offered them a priest who was disgruntled about being forced into an appointment they didn't really want or exhausted from holding down two jobs to make ends meet, they probably wouldn't be too keen. But this is the path that "part-stipendiary" is taking us down now. It's not an attractive prospect, leaving parishes ill-served and opening us up to the charge of exploiting our staff. Dioceses need a serious think about whether cheaper appointments are always the best ones, and how we manage the demands on priests in part-time appointments.

Ray Barnes said…
I agree with you Charlie. Not in way way fair, either to the priest or to the congregation.
Perhaps, if you are going to take up the cudgels on behalf of the part-stipendiary you could suggest they need only do half the training.
June 14, 2013 at 11:23 AM

Archdruid Eileen said…
Logically, SSMs could then do no training at all, Ray!